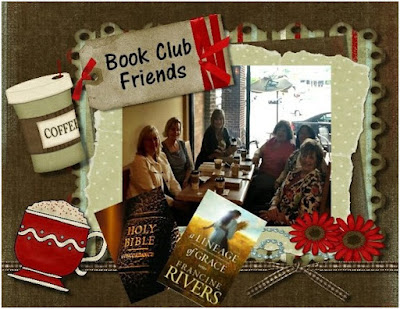 This morning I was able to take a break from work related things and join my friends for book club. Didn't Teresa, the scrap booking pro, do a wonderful job of enhancing the picture?  A nearby gentleman  kindly agreed to take several snapshots while we were meeting at Caribou Coffee.

We caught each other up with our personal affairs after a lengthy time of sharing and eventually moved on to discussing the story of Bathsheba and King David.

King David was a man whose heart was after God, but he did make several decisions that cost him significant consequences, ones that he had to endure the remainder of his life. Can you imagine the amount of pain and heartache David suffered after the death of 3 sons and a daughter that was raped by one of his sons? David and Bathsheba repented and God blessed them with a Godly son, King Solomon, who followed King David's kingship. Israel under Solomon's reign had many years of peace.

Bathsheba was not accepted among the people of Israel. She was always being referred to as the woman who had an adulterous affair with King David and as the wife of Uriah, even though Uriah had been purposely killed by a command David having him placed on the front lines in battle. She lived a lonely life for many many years. Yet she kept her strong faith in God regardless that no mercy or grace was ever shown to her by her own family, other people within the king's palace or with the Israelites. Can you imagine having that kind of strength?  But as often said when there is nothing else to hold unto around you the only thing left is God.

Both David and Bathsheba were forgiven and used by God to serve his purpose. When Solomon became king of Israel, finally Bathsheba was accepted by the people of Israel and was now called by her name. How painful it must have been for Bathsheba not to be called by her name but what relief to finally be acknowledged!  What a wonderful story of redemption. Christ was to follow in David's and Bathsheba's lineage.

I saw this wonderful new idea on how to use Jelly Rolls for making a great looking quilt.

Isn't that a fun quilt to make?