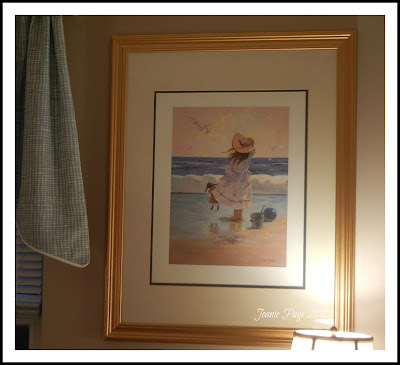 I purchased the little girl on the beach print about 15 years ago, maybe longer. It was never framed until this past weekend but still stood on a wall shelf in my quilting/sewing/office. The frame had another picture in it that I wasn't overly fond of. I couldn't believe how nice my little girl looked in the frame! Even my hubby said it looked good!

I love the colors in the picture, especially the ocean blue and pinkish tan/sand color. The sand was the inspiration color to repaint my walls - finally! 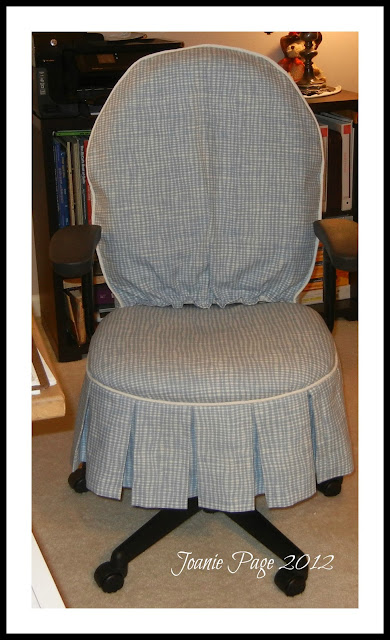 I have been talking about painting for well over a year and purchased a can of paint about 2 months ago. You can't hurry into these things! Prior to painting the walls they were medium blue. I wearied of the color especially since I practically live in it daily.
Now that the walls were painted I was motivated to cover my office chairs, something I have been contemplating for quite awhile too! Fortunately I had enough extra fabric from the window treatments I made many years ago.

I'm getting excited!! Do you realize how many UFOs I have accomplished here? Well they were sort of UFOs since they began in my head many years ago.

I made slip covers for my desk chair, my first attempt ever making them.  I have reupholstered several chairs in my day but learned there are some differences between making slip covers and reupholstering furniture.

I started with the back of the chair. Not quite the tight fit I wanted but when making the seat I figured out how to better fit. Learning curve! I will know what to do the next time. For now it is good enough! 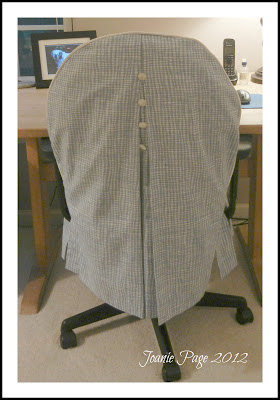 How do you like my box skirt? It took a lot of fabric to make them but worthwhile for appearance sake.

Tah Dah! The back of my chair.  The back has a box pleat  decorated with pearl buttons, ones that were on hand.

On Pinterest there are pictures of slip covered office chairs with a bow added to the back instead of buttons. Though the chairs looked really sweet with the bow I much prefer the simplicity of the pearl buttons.

It took about two and half days to complete the slip cover for the office chair.

There was not enough fabric to slip cover the other office chair, but enough to cover the seat and back. 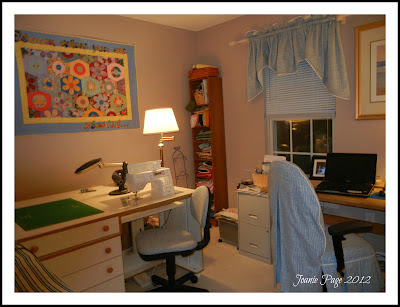 Hunting for something to use to shove the fabric between the front and back I came across a spatula for smoothing wall patching. It worked like a dream, so well that I finished the seat doing the same process for the seat as well.

I changed my furniture around too! It worked out that from either my desk or sewing table I can look out the window into my garden. 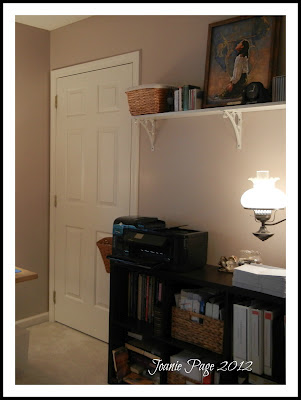 Now I have to find a way to have a couple sheets of insulation board delivered to my house so I can make my design wall. It will not fit in my car. I had the length figured out knowing it would fit in my car with the seats folded down. What I didn't take in consideration was the width. The board is 4 ft wide and I need the full width of 2 boards in order to have a nice size design board.

Here is a snapshot of another wall with my cubicles with a couple new baskets to put office supplies in them. I could use one or two more. I purchased all that Lowes' had at the time.

Now I need to get busy finishing my quilt UFO!!


In between painting and slip covering Mike and I made a couple of excursions the last two Mondays in a row! I call them our date Mondays. 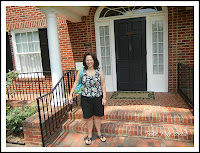 Last Monday we visited the Billy Graham Library. We talked about doing this for a couple of years and we finally did!  Here we are in front of the home where Billy Graham was raised by his parents with 3 siblings in Charlotte, NC on a dairy farm. The home has been moved twice having been dismantled. Each brick, window, wood flooring slat and etc. had been taken piece by piece. 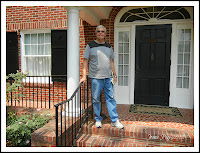 Interesting the left wing off the living room was Mrs. Graham's office/sewing room! Billy's mom would take milk orders while working in her sewing room.

The inside of the home is quite lovely, though not furnished with the exact furniture but similar. 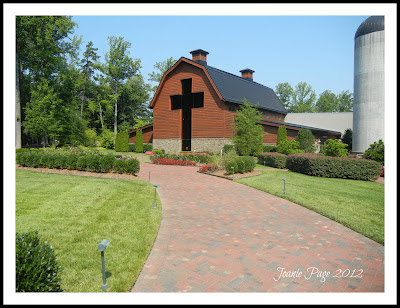 This is the front of Billy Graham Library. Inside is a bookstore, small restaurant, museum and Billy Graham's office/library where he had over 3,700 books.

His life is a testament of him being sold out for God! He was called to be an evangelist at a very young age. There are pictures of him with many presidents that served while he was preaching during his prime such as: Truman, Eisenhower, Nixon, Kennedy, Ford, Carter, Reagan, Clinton, Bush, Bush Sr., Obama. Yet! as comfortable as he was with presidents and leaders of other countries he was also with common people. He gave Ruth, his wife, a missionary kid in China, more credit for knowing the Bible than he did. All five of Billy's and Ruth's children serve Christ, which Billy gives all credit to Ruth for raising the children well.

Billy's crusades where huge crowds gathered to hear a word of hope and walk forward to receive Christ will be his lasting legacy!

Email ThisBlogThis!Share to TwitterShare to FacebookShare to Pinterest
Labels: My Home