A New Day a New Block

Chain Block, a derivative of the Drunkard's Block, is a bit more time consuming to sew but well worth it! Another Craftsy BOM - September's precisely. Precisely is not exactly what I would call the workmanship, but not too bad for the first one. You know how you have to make one to learn what you can do to make it better the next time around? Do you make a test block before sewing blocks for a quilt?

The curves are a bit testy, but not nearly as formidable as first thought. Definitely need to stick to the SCANT 1/4" seams on this block pattern. I chose to sew on the concave side of the block and pin upward rather than downward. That helped greatly in stepping up the speed.

In order to make the intersections so that they didn't have a hard hump I twirled the seam intersections on the backside. To do so I did have to twist the seam midway in the two center blocks of each row. This is something I would have never done in the past but since the twist is less noticeable than the hump I will do it again. 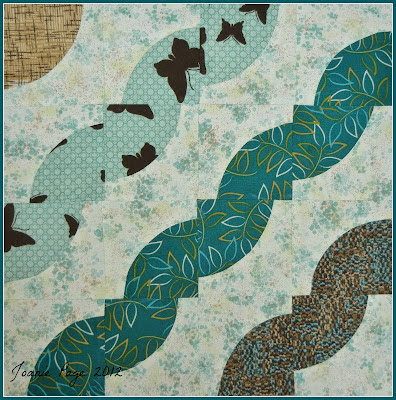 I am celebrating today!
I have officially lost 9 pounds as of today! Everyday it has been at least an hour of cardiovascular and keeping calories below 1200 per day! Eating the right foods does make a difference.


Here is a website on some good ideas for success! Advocare Nutrition Works.

So this evening since I worked late hubby decided  he wanted to go to Showmars. Oh my most of the meals  are equal to the calories I have been keeping to on a daily basis. I decided on a baked potato and steamed vegetables while my hubby had his Chicken Platter with french fries, breaded fried chicken and cole slaw. I did help him with a couple of his french fries since I think they are the best! I googled their nutrition list before leaving and had a plan of what I could eat and stay within my calorie limit.

Until tomorrow wishing all a wonderful day!