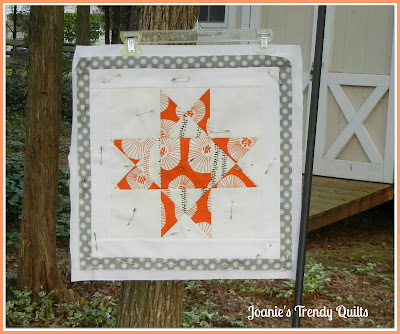 Blocks shown are ones received from a block swap at the Charlotte Modern Quilt Guild. I won these along with 14 other star blocks. Fabric used is Echo by Lotta Jansotter, a fabric line that seemed to be the craze last year. Taking the blocks received I added white frame borders and another border using Denise Schmidt fabric to add more interest.

These blocks had been on my design board for a long time as I was not able to come up with something to pull these blocks together other than let them float. My husband walked in and I asked him if he thought it needed a tad more color and he agreed that they did. Though I was also given fat quarters along with the blocks I didn't have enough so off to my local fabric store I went look for something that would work. 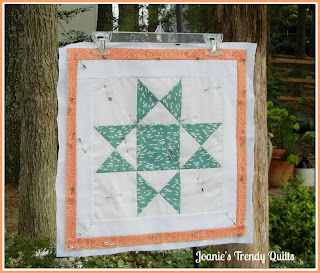 I happened to have some  leftover Hobbs Heirloom Fusible 80/20 batting by Harriet Hargrave. This was perfect. Cutting the batting to match the size of the block I pressed the batting to the block. For the backing I cut a piece that was 7/8" larger on each edge and pin basted it to the block top and batting. I did this sitting down at my sewing table (backside that has a leaf) rather than crawling on the floor. That was a major plus for me!

My plan is to quilt them as I go using the Fun and Done way. I wasn't up to quilting another full quilt on my domestic machine having just finished up one. Dragging and shifting the quilt is hard work. Once each block has been quilted a seam will be sewn by having the backsides facing each other leaving the seam on the front side. The seam will then be folded and stitched down. 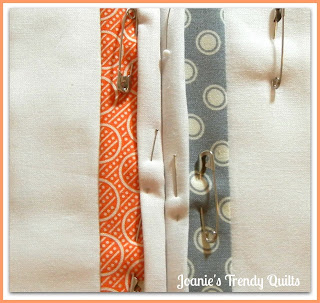 The picture above is pinned to show the results of the backing edges turned under. It creates a seamed white sashing.

I am so happy that another WIP is moving closer to being finished!

Posted by Joanie's Trendy Quilts at 6:12 AM